This review is for the CANNED Ziwipeak product. The review on dehydrated Ziwipeak venison is coming soon! It’s now sittiing quietly in my cupboard, hoping I will pick it up…soon…

ZIWIPEAK IS PREMIUM FOOD. It costs about $6 each at Pet Lovers Centre, and comes in 6.5 oz cans. That’s slightly bigger than your usual Wellness Core cans, which comes in 5.5 oz. I really hope that the 12oz tinned food will come in because it’s simply more economical to buy the 12 oz tinned food.

Here is the can, looking all smug in its $6 glory. You can almost hear it sneer: beat it, cheaper 5.5oz foods!

A fat tin. I chose the Venison flavour because as the blue tin, Vension and Fish…has, well, fish. Fish is not good for cats because 1.) it is highly allergenic and 2.) is high in phosphorous, which means an increased risk of Urinary Tract Infection.

Urinary Tract Infection is not fun, for both the owner and the cat. So as a general rule, I don’t feed my cats fish. And I get annoyed when I see tins upon tins of FISH, FISH AND FISH. C’mon! What about those who don’t want to feed their pets fish? Or who swore, by the deathbowl of their dying goldfish pal, that they would never touch another fish as long as they lived?

Anyway. Venison was once considered a ‘rare’ game meat, but these days it is quite common.

Venison is low in fat, so if your cat is fat, as Max is, or if your cat is prone to being rotund, as Max also is, venison is a good choice. Unfortunately, venison isn’t available cheaply in its raw form in Singapore: you’ll mostly find venison in canned and kibble, but rarely in it’s raw form. It’s just a muse for now. so perhaps buying a fat $6 grain-free Ziwipeak can will have to do for now. Still, if you have the budget for raw vension, go for it!

Here is a place to get raw venison:

These places do not sell raw venison at time of writing:

For now, here is what Ziwipeak Venison (canned) looks like. Not particularly tasty-looking, but I’m used to brown goopy cat food. Smells gamey, of course, but not as strong as lamb. 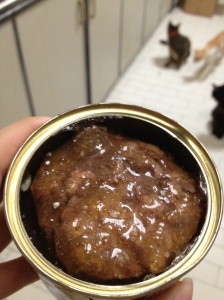 Goop In A Can! To quote Ziwipeak.com,

”Each can of ZiwiPeak Cuisine is retort-cooked in its own sterile container to preserve the nutritional integrity of the raw ingredients. The cans we use have a BPA free food contact lining to ensure the contents are as safe and natural as possible.The canned ZiwiPeak Cuisine contains a minimum of 66% raw meat, with the balance being moisture and other essential vitamins and minerals like in the dry cuisine.”

66% raw meat! That’s a whole lot of protein more than your average cat canned food. But then again, it IS $6.

$6 can buy you about 500 grams of pork or chicken, by the way. It is on the whole cheaper to feed raw. And there’s just something ironic about me buying Ziwipeak just because it was COOKED to preserve the integrity of the RAW ingredients…but there are times when I absolutely don’t have the time to prepare raw, so Ziwipeak is good.

Oddly enough, the goop feels hard and chunky. You know that you’re getting real meat and not just some jelly-mash concoction. Can you also see the white specks? Those are fine bone fragments, which is needed for calcium. Most Singapore raw feeders don’t have a grinder of their own to process meat AND bone together, and unless your cat will eat chunks of bone-in-meat, such as chicken necks or backs, it may be difficult to get any bone inside them at all. 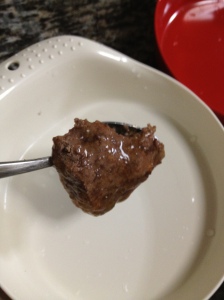 In its original form. I usually add water into whatever the cats eat to ensure that they get more moisture, but for the purpose of this post, I have left it as it is. I will show you their soupy dinners next time.

Now…for the test! As you can see, a certain greedy feline is already hooked.