The journey to raw: Timmy’s story

The Journey to Raw

The journey started with cat poo, lots of it. 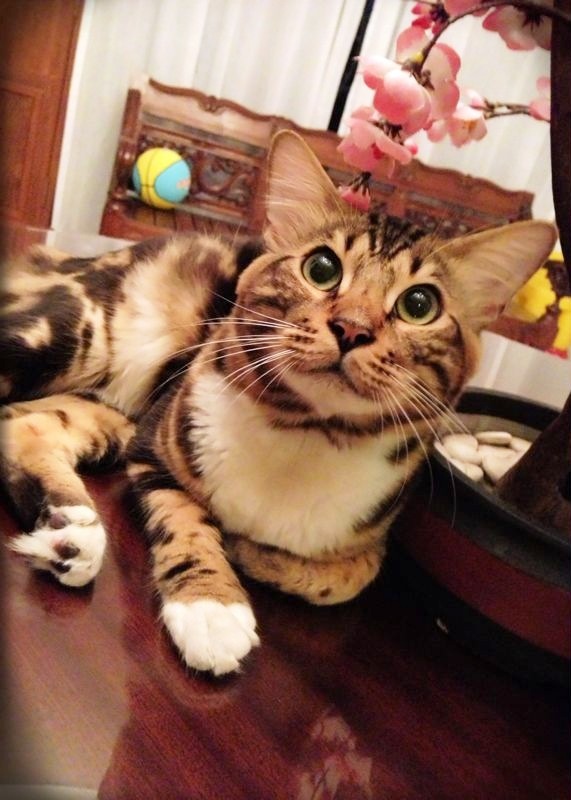 Since Timmy came to our home 6 months ago, my family and I haven’t been able to breathe easy.   From the first day Timmy arrived at our home, his poo had never been solid.  It was runny, had blood and mucous, and stank up the whole house.  Only a few days after we brought him home, he was whisked off to the vet for a thorough check.

It was revealed that he had parasite and E.Coli infection.  That was just the start of our roller coaster journey with cat food.  Initially we had him on a famous veterinarian-recommended kitten kibble.   Timmy was 5 months old at that time so it made sense to feed kitten food right?! And my sister, the cat lover, fed all her cats that particular vet-recommended brand so I followed suit.

After that visit to the vet, I was told that he should switch to an even more premium version of the same kibble brand which was supposed to be better for cats suffering from diarrhea.  The food stank up his poo even more,  but I thought that if it was vet recommended, it must be good for him.  I stuck with it even though it didn’t do much good for his runny poo.  To make matters worse, the infection that Timmy had was very persistent.  He’d be fine after his course of antibiotics, but the infection would always come back again after he was off it. 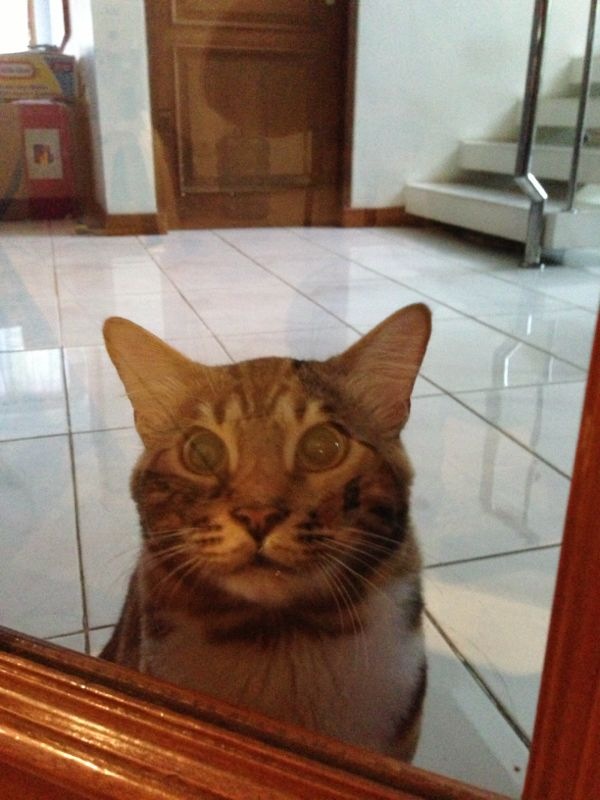 That went on for 4 months after which Tim had changed vets 3 times, eaten countless medicines, had an x-ray and an abdominal ultra-sound check.  And yet, even when he was declared germ-free by the vet, Timmy’s poo was still soft and smelly.  The vet came to the conclusion that he was allergic to his food.  Time for food change yet again!

I switched him to yet another famous brand of dry and canned after hearing all the good stuff about the brand.  Tried the uber expensive stuff for a few weeks and yet, Tim’s poo was still soft.  Food change for the fourth time…  this time, I fed him yet another type of wet and dry food that was marketed as holistic.  And…still, no change in his poo.  Worse, to my horror, he started having blood and mucous in his runny poo once more.  Parasite infection again!

Poor cat was put on antibiotics and B12 injections, once more.  I was told to switch his food to one for sensitive stomach  (again) or even consider putting Timmy on a hypoallergenic dry cat food, which is a hydrolyzed protein diet.  What it is is that the protein in the food had been “chopped up” into very tiny particles so that the cat’s body will no longer recognize it as an allergen, hence, no more allergic reaction.  I told the vet a flat “NO” after reading up about hypoallergenic food.  No way in this world am I going to subject my precious baby to such processed food!

All the time that Timmy was having his stomach troubles, I had always suspected that he was having an allergic reaction to something in his food.  Allergic to what exactly, I don’t really know. It was impossible to isolate the culprit as the cat food had so many additives, carbohydrates (yes, even grain-free has carbohydrates!) and other unnecessary ingredients.

I have started doing my research about the raw food diet, and thought that I should only move toward that direction as a last resort.  After all, commercial cat food is convenient and less expensive right?!  And honestly, I was a bit apprehensive about letting my fur baby eat raw meat due to hygiene issues.

However, after that last bout of infection, and countless bags of unsuitable cat food, I started to seriously think that maybe raw food will indeed be the way to go.  I wasn’t too worried about whether Timmy will eat the raw meat because I know he’ll eat anything (thankfully he is greedy or he would have become be skin and bones with all his digestive problems).  It was just a matter of my getting over the idea that uncooked meat is not suitable for consumption.

Here’s a video of Timmy asking for food:

The day that I switched Timmy to raw food was such a momentous event. I had thought that it would take at least a few days before I could see the benefits of the switch …but no, the change was immediate!  Not only did Tim absolutely love the food, his twice (at least!) daily litterbox nightmare had stopped!  The change was so dramatic I almost broke down and cried! 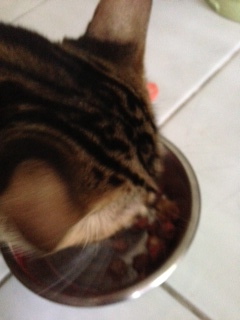 Chowing down on raw meat!

It has been more than a week since the switch to raw and the entire household is rejoicing on being able to breathe easily again!  I have noticed that Tim sheds less than before too.  I used to dread carrying him as his fur would be stuck all over my sweaty neck afterwards (yuk!).    He has also stopped his irritating habit of scratching every time somebody touched him.  Clearly, the benefits was plain to see.  We are a happy family once more!  My only regret is that I hadn’t switched him earlier, as I would have spared him the trauma of the vet visits and medications, and saved myself lots of monies.

A piece of advice to anyone thinking of going down the raw path : do your research before taking the plunge.   Get to know the facts and talk to people who have experienced it.   It is better to be an educated follower rather than a blind one.  However, I can guarantee  that once you’ve seen the benefits of raw, there is no looking back.  I know I won’t be!  😉

Just want to make it clear that I am in no way espousing the raw diet for everyone.  I am merely sharing my experience so others can learn from it and decide for themselves.  Here I am also to give a shout out to The Raw Explorer for accompanying me and Timmy on this journey: thank you for your invaluable advice and moral support.  It is such a wonderful thing what you are doing.

I am the king of the castle!