The cats LOVE Taste Testing Time because it’s the only time they get something that’s non-raw/home made. Of course they find processed food tastier!

Here’s what we are going to look at today! 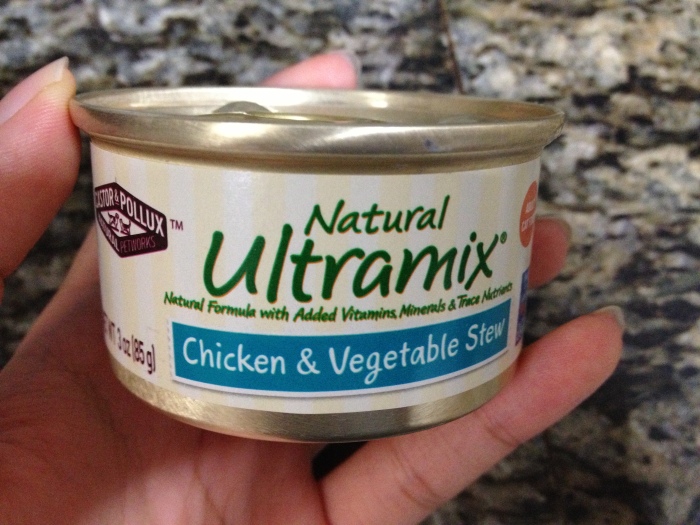 Castor and Pollux belongs in one of the best categories of pet food. Yes, it deserves its ‘premium’ promise, unlike many other brands who claim the word but do otherwise. This company specialises in organic dog and cat food, and everything–from meat to veg to fruit–is organic.

Two paws up for the company!

This is what it looks like inside… (mind the huge potato cube!)

Organic though C & P may be, there are a couple of things I didn’t quite like about this:

1.) The brewer’s rice flour. It’s called brewer’s rice because it’s grain that has been previously used for alcohol-making, which makes this ingredient a by-product and filler.

4.) Natural flavour. Don’t know what it is, don’t know how natural it is!

Quibbles aside, here’s something that tickled me enormously: DRIED BANANAS?! ahaha! First time I’d seen bananas in a cat food! 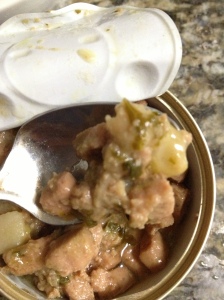 Unfortunately, the protein % is pretty low. Given the fact that there are things like potato and peas (and bananas!) the protein % probably includes some plant-based proteins as well, so that makes the meat % even lower. A little sad…for a good brand.

I wouldn’t feed this to kittens because of the low protein % (hence the need for most companies to come up with a separate ‘kitten’ food).

This stew (remember, ‘stews’ are often suspect because they contain a lot of veg and carbs) smells heavenly.

I also drooled a little bit when I gave the kitties some, and cat food mostly don’t elicit that sort of response. They aren’t even supposed to, right?

Here’s a video for you:

I’d feed this over another food with carageenan anyday, even if it does come with a long list of vegetables, and I’d also use this for fat cats instead of ‘indoor formulas’. Also good for cats with constipation, because of the veg levels.

I did get the feeling that Castor and Pollux was marketing to owners with this food rather than creating a food that’s really good for pets, BUT that said, with so many crap foods out there, this is really not that bad.